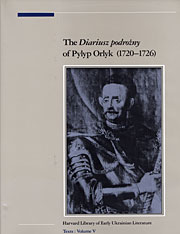 Elected successor to Ivan Mazepa in 1710, Hetman Pylyp Orlyk led the Ukrainians who had emigrated after the Battle of Poltava in the struggle against Russian domination. His diary, spanning the years 1720–1733, constitutes an invaluable guide to Orlyk’s personality, his travels, and his politics. It also includes copies of several hundred items of correspondence both of a political and personal nature.

The present facsimile edition of the Diariusz podrożny, which has never been published in full, appears in three parts. The first, covering the years 1720–1726, is of special interest, since it describes Orlyk’s peregrinations through Germany, Austria, Bohemia, Poland, and, finally, the Ottoman Empire, where Orlyk was to remain interned from 1722.

The Introduction by Orest Subtelny provides an overview of Orlyk’s biography, the contents of his Diariusz, and its place in historiography.