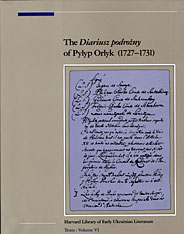 This continuation of Pylyp Orlyk’s Diariusz podrożny encompasses the dramatic years 1727–1731. From his “honorary” confinement in Ottoman Thessalonica, the Ukrainian Hetman-in-exile tried to influence on his behalf the European powers whose representatives were gathered at the Congress of Suissons. To this end, Pylyp Orlyk managed to use the services of France, England, the Netherlands, and especially Sweden and Holstein, who served as his intermediaries with Russia. Of special interest are Orlyk’s entries for 1729–1730. It was at this time that Pylyp’s son Hryhor quit his military service with King August 11 of Saxony-Poland and became an important player in France’s relations with the East. Father and son met in Thessalonica in 1730 and henceforth cooperated in furthering their respective political ventures.

The Introduction by Omeljan Pritsak places the Diariusz within the context of Orlyk’s vision of the Ukraine’s past, present, and future.