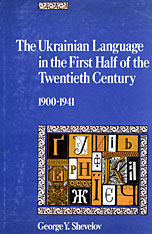 Its State and Status

The first half of the twentieth century was in many respects crucial for the evolution and character of Modern Standard Ukrainian. Prior to World War I, the Ukraine was divided between the Russian and the Austro-Hungarian Empires. The standard language lacked uniformity even though the primacy of the standard established in Russian-dominated Ukraine was theoretically accepted in Austrian-ruled Galicia and Bukovina. Up to 1905 the tsarist government forbade the public use of Ukrainian beyond belles-lettres, and excluded it from education until 1917. In the interwar period the country was divided among the USSR, Poland, Romania, and Czechoslovakia, and social and cultural conditions differed drastically.

George Shevelov’s book, based on extensive study of factual material, traces the development of Modern Standard Ukrainian in relation to the political, legal, and cultural conditions within each region. It examines the relation of the standard language to the underlying dialects, the ways in which the standard language was enriched, and the complex struggle for the unity of the language and sometimes for its very existence. While shunning excess linguistic terminology, the book presents the essentials of linguistic development in connection with broad political and cultural conditions.