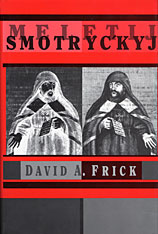 Meletij Smotryc’kyj was one of the outstanding figures in the great flourishing of Orthodox spirituality that occurred in the late sixteenth and early seventeenth century in response to the challenge posed first by Polish heterodox religious movements, and later by the Polish Counter-Reformation. His biography reflects the tensions and contradictions that characterized his “nation”—the Ruthenians, the Orthodox Christians of the Polish-Lithuanian Commonwealth. Ruthenian patriots were torn between various allegiances to nation, church, and traditions. Thus, in Smotryc’kyj’s life we witness one of the later acts in the drama of the European Age of Reform, all the more important because for the first time the Reformation and Counter-Reformation came into direct daily contact with the Byzantine world of Orthodox Slavdom.

David Frick’s biography—the first major English-language work on Smotryc’kyj—examines the ways in which established cultures were altered by cross-cultural understandings and misunderstandings, resulting from the confrontation and mutual adaptation of two or more diverse cultures. This study, which has affinities with the “microhistorical approach,” seeks to reconstruct details in the lives of individuals and pays special attention to the ways in which individual world views conflicted with each other and with various higher authorities. Meletij Smotryc’kyj will be of interest to scholars and students of Ukraine, Belarus, Poland-Lithuania, and those researching the history of the Uniate, Orthodox, and Roman Catholic Churches in Eastern Europe.