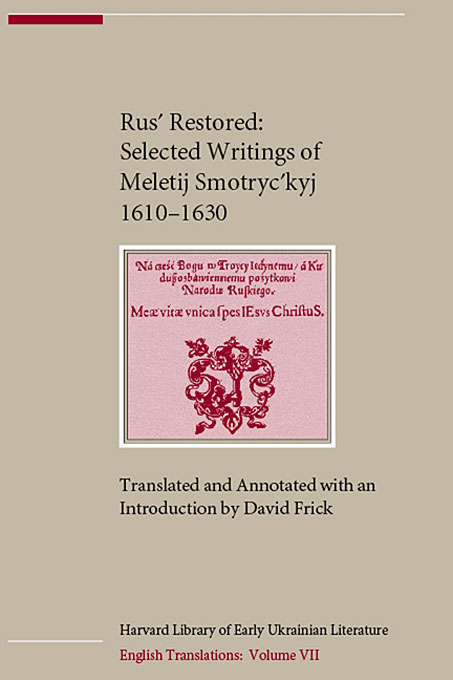 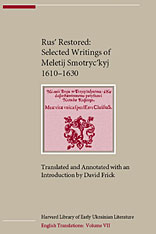 Translated with commentary by David A. Frick

Meletij Smotryc’kyj was at the center of the debates that agitated Ruthenia in the period following the Union of Brest (1596). This was a turbulent time for Ukraine, as the Uniate and Orthodox Churches sought to gain control over the confessional lives of Ruthenians. An ongoing debate was waged in writing, with each side publishing impassioned attacks on their opponents’ views and fervent defenses of their own. A prominent religious figure and polemicist, Smotryc’kyj was caught up in the struggle between Orthodox and Uniate beliefs.

In the early 1600s, Smotryc’kyj emerged as one of the leading spokesmen for Ruthenian renewal under the Orthodox, or dis-Uniate, banner. His polemics served as the cornerstone of the Orthodox response to the Polish-Lithuanian Reformation and Counter-Reformation. He later converted to Uniatism in 1627 and sought to expose the weaknesses of the Orthodox Church, arguing for a new unity between the eastern and western Churches. The works collected in this volume, written by Smotryc’kyj over a period of twenty years, offer unique insight into the elite of early modern Rus’ and their place in the Polish-Lithuanian Commonwealth.