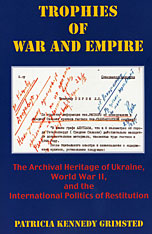 Trophies of War and Empire

The Archival Heritage of Ukraine, World War II, and the International Politics of Restitution

The collapse of the Soviet Union and the fiftieth anniversary of the end of World War II have brought attention to the displaced cultural and archival heritage of many nations. The situation of Ukraine provides a striking example of the many international problems involved in questions of restitution. Patricia Kennedy Grimsted considers (among many topics) the problems of defining the archival heritage of Ukraine vis-à-vis Russia; international precedents for post-imperial archival devolutions and postwar restitution; intentional Soviet archival destruction in 1941; the Ukrainian component of Soviet library and archival trophies in Moscow and Kyiv; Russia’s bitterly disputed 1998 law nationalizing cultural trophies; and post-1991 Ukrainian restitution policies.

Containing significant new revelations about cultural treasures previously thought lost, Trophies of War and Empire will be of interest to all those interested in the contemporary rebuilding of cultural and intellectual institutions in Eastern Europe.