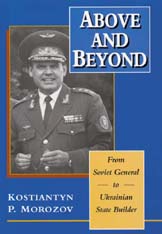 Above and Beyond is the first book to appear in the West by a major Ukrainian independence figure and is the first by a former Soviet general to discuss the inner workings of the USSR’s military. Kostiantyn P. Morozov provides behind-the-scenes insights on Yeltsin, Kuchma, Dudaev, and other important players still active today. His book will firmly alter our perception of the USSR and its demise, the Soviet military machine, and the rise of modern, independent Ukraine.

In September 1991 Major General Morozov informed the Soviet Armed Forces Command that he was no longer a Soviet general, but the new Ukrainian Minister of Defense. He then set out to create the Ukrainian Armed Forces (UAF), mounting a brilliant campaign to remove from Ukraine military personnel who were not Ukrainian citizens and not loyal to the new Ukrainian state, taking over the Ukrainian-based assets, nuclear and otherwise, of the Soviet Army, and firmly grounding the idea of an independent UAF in the public mind. Within a year of assuming his post, he was overseeing the second-largest army in Europe and the third-largest nuclear arsenal in the world. The shock waves of his efforts would eventually lead Vladimir Zhirinovsky to put Morozov at the top of his “hit list” of those responsible for destroying the USSR.

Morozov guided his forces through a minefield of intrigues as various figures sought to undermine the UAF and subordinate it to the armed forces of the CIS and, therefore, to Russia. He stood as an important figure in the political landscape for his blunt candor and total devotion to Ukrainian sovereignty. This was especially remarkable because Morozov was ethnically half-Russian (or so he thought), spoke no Ukrainian, and came from the eastern part of Ukraine, long believed to be faithful to Russia and Soviet rule.