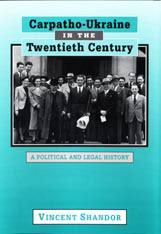 Carpatho-Ukraine in the Twentieth Century

A Political and Legal History

Carpatho-Ukraine in the Twentieth Century offers political memoirs and commentary by Vincent Shandor, an elder statesman who served as head of the Carpatho-Ukrainian Representation to the Prague Federal government during the period preceding and at the beginning of World War II. From his unique first-person perspective, Shandor analyzes the shifting political and legal status of Carpatho-Ukraine from the twilight of the Habsburg Empire through the region’s two decades as Czechoslovak "Subcarpathian Ruthenia" and onto the wartime reoccupation by Hungary and the region’s ultimate incorporation into the Ukrainian SSR. Significant both as scholarly critique and as autobiography, Shandor’s work presents materials never before available in English about events leading up to and during World War II. It will be valuable to all those interested in the twentieth-century development of Central Europe.