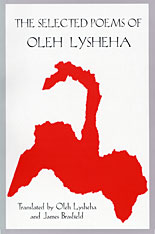 The Selected Poems of Oleh Lysheha

Translated by the Author and James Brasfield

“Out of a silence imposed by history and ignorance comes the shattering voice of Oleh Lysheha. Ukraine has its overdue political autonomy, and now, with these poems and play, an equally overdue rendition of Ukrainian life, love, and stalwart hope. Lysheha’s ‘Swan’—‘My God, I’m vanishing…’—alone makes the book a treasure. This work offers American readers in particular not just a new voice, but, even in translation, a new language, a new way of seeing. Lysheha speaks through indirection, and observes through the sides of his eyes, but the effect is a set of blows to the heart, which leave one more alive, not less.”—James Carroll, author of An American Requiem: God, My Father, and the War that Came between Us

“Oleh Lysheha joins a small and unlikely company of poets—which includes Montale, Lawrence, Rilke, and Simic—as a metaphysician of the natural world who finds hidden openings through which the poet passes beyond himself into the outer dark. His travels through the door beyond the still point of our turning world refresh our faith in the mystery.”—Askold Melnyczuk, author of What Is Told

“Psychologically inward, phantasmagoric, Oleh Lysheha’s poems are darkly comic fables about the risks, pleasures, and limitations of trying to perceive the Sublime in Nature. What is original in his poems is his ironic understanding of how absurd gestures like sitting on an ant hole are as likely to provoke ‘visionary hours’ as the contemplation of ‘one of those heavenly days which cannot die.’ His interest in Nature is decidedly lowercase—nature in its specific operations, and not as a springboard for metaphysics. An alder by a stream may become suggestive of symbolic meaning, but the poet never insists. This modesty of scope shouldn’t be mistaken for modesty of ambition: his poems are quirky, uncompromising, full of unexpected dips and veers of sensibility.”—Tom Sleigh, author of The Dreamhouse