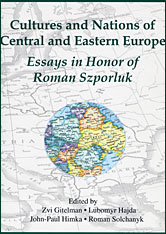 Cultures and Nations of Central and Eastern Europe

Essays in Honor of Roman Szporluk

Written in honor of one of the foremost observers of nationalism and culture in Central and Eastern Europe, this volume brings together 35 eminent scholars from the United States, Canada, Ukraine, and Poland.

Supplemented by a bibliography of the work of Roman Szporluk, these fresh, urgent essays mirror Szporluk’s broad and comparativist approach. Topics range from the rise of Ukrainian national consciousness in Galicia to nationalism in contemporary Serbia; from the rise of private property in the Russia of Catherine II to contemporary Russian attitudes toward Ukrainian nation building. Other essays explore the impact of theories of nationalism on the discipline of history and critique Ernest Gellner’s “constructivist” theory of the nation.