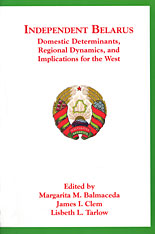 Domestic Determinants, Regional Dynamics, and Implications for the West

The fall of the Berlin Wall in 1989 ushered in a period of democratization and market reform extending across the East-Central European region, with one important exception: Belarus. Ironically, Belarus’s fledgling attempts at democracy produced a leader who has suspended the post-Soviet constitution and its institutions and created a personal dictatorship. Located in the center of the European continent, Belarus lies at the crossroads of an expanded NATO and the Russian "near abroad." This fact underlines the importance of Belarus to European security and to East-West relations.

To discuss developments in Belarus, an international group of scholars and policymakers gathered at Harvard University in 1999. The broad spectrum of issues covered is examined in this volume, providing an understanding of Belarus today and its prospects for the future.