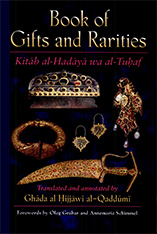 “This book, which casts light on many areas of life in the medieval Muslim world, will undoubtedly be useful to social, economic and art historians interested in the period.”—Hilary Kilpatrick, British Journal of Middle Eastern Studies

“This is a magnificent book on the fascinating subject of exchange of gifts between different strata of society involving élite and commoners, including Muslim rulers and their foreign counterparts, courtiers, governors, ministers, chieftains and army commanders, on a variety of occasions… The translator’s attempt to define the Arabic terms for various things and gifts alone should merit wider recognition. It has been a labour of love to bring Book of Gifts and Rarities to print and to give the flavour of the original. As a critical edition and translation it has few parallels in contemporary Arabic scholarship… Ghada al-Qaddumi’s version of Gifts and Rarities illustrates refined taste in high society under Islamic rule, besides shedding light on related historical topics, such as estates owned by the Prophet’s Companions, the enviable inheritances of Muslim ladies famous in Islamic history, and the booty won by Muslim armies in historic battles… This book gives the reader a feeling of pride and joy in the Islamic heritage… It is a treasure of cultural history.”—Muhammad Abdul Jabbar Beg, Muslim World Book Review