RELIGIONS OF THE WORLD AND ECOLOGY 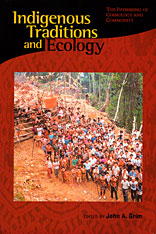 The Interbeing of Cosmology and Community

Edited by John A. Grim

“Contributors to the present volume offer myriad examples that demonstrate ways in which the ancient cosmologies of indigenous traditions are understood as a totality of belief, imagination, and sustainable practices describing a community’s relationship to the land. There are in indigenous lifeways no sheltered and isolating constructs that separate religion from nature. Some essays explore the implications of this intimate knowing of one’s place for policy makers and activists of the world. Several writers pose ‘liberative’ ecological strategies grounded in indigenous epistemologies. Recommended.”—L. De Danaan, Choice

“The pressures on indigenous lands and traditions and the commodification of indigenous lands by corporate and government powers are important issues addressed in this volume. The book contains excellent discussions of the continuing exploitation of indigenous peoples in terms of environmental racism as exemplified by the proposed disposal of nuclear wastes on indigenous reservations. It covers ecological, religious, and political issues in a striking way. Brilliant and exemplary!”—David Kinsley, McMaster University

“Confronting readers with the awful human and ecological costs borne by indigenous peoples in an age of globalization, this book also celebrates ecological ethnicities and their creative forms of resistance. If you live on this planet, you need to read this book. If you love this planet, you will want to.”—Joel Martin, University of California, Riverside