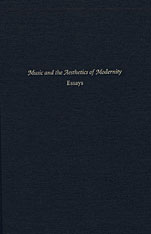 Music and the Aesthetics of Modernity

For most music historians, the modernism of the twentieth century was until recently the only appearance of the “modern” in music. The widely perceived recent decline of musical modernism makes it now possible to see the modernism of the twentieth century as a chapter in a much longer story, the story of musical modernity. The principal purpose of the present book is to encourage a debate over musical modernity; a debate that would consider the question whether, and to what extent, an examination of the history of European art music may enrich our picture of modernity and whether our understanding of music’s development may be transformed by insights into the nature of modernity provided by other historical disciplines.

This book had its origin in a conference that took place at the Music Department of Harvard University on November 9–11, 2001 to honor Professor Reinhold Brinkmann.