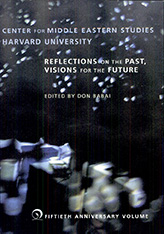 Reflections on the Past, Visions for the Future

The Center for Middle Eastern Studies (CMES) was founded in 1954 to promote the interdisciplinary study of the Middle East at Harvard University. The Center’s mandate has involved it in teaching as well as research on both the classical and contemporary aspects of the Middle East. Its scholarly interests also include Islamic societies and cultures worldwide. CMES functions as the coordinating body and a primary source of intellectual and material support within the Harvard community for academic programs covering the vast area between Morocco and Iran, and beyond. This volume, edited by Don Babai, was prepared as part of commemorations for the fiftieth anniversary of the Center. It consists of three parts.

In Part I, Babai surveys the rich and complex history of the Center, beginning with its founding by William Langer, a diplomatic historian who had a seminal influence in the development of area studies at Harvard in the postwar years. This survey chronicles the Center’s growth and transformation through the eventful and at times tumultuous tenures of eleven subsequent directors, from Hamilton Gibb, the Arabist, to Cemal Kafadar, the Ottomanist. It also offers an interpretation of the determinants and consequences of the Center’s choices over the last five decades and examines its evolving mission against the backdrop of current debates on Middle Eastern studies and area studies in general.

Part II presents an extended account of the multifaceted operations of the Center that serve the scholarly community at Harvard and the world at large. It discusses the Center’s teaching activities, especially its AM and joint PhD degree programs, and the changing profile of students in these programs. It summarizes the findings of ongoing efforts to survey the career patterns of CMES degree holders and provides brief sketches of the work of some of its many distinguished alumni in academia and other fields. It also looks at the Center’s activities in disseminating knowledge of the Middle East to the New England community through its outreach program and to the scholarly community through its specialized publications as well as its seminars and conferences. Other sections review the Center’s research initiatives and the activities of its visiting scholars and research associates.

Part III, “The Future,” consists of essays by members of the core faculty and other scholars who have had an ongoing association with the Center. The essays, beginning with an integrative overview by the incoming director, Steven Caton, assess the strengths and weaknesses of the Center with an eye to the larger question of the challenges the Center is likely to face in the coming decades. The authors, who include many of Harvard’s leading scholars in Middle Eastern and Islamic studies, present diverse but complementary visions of the Center’s future, weighing not only the altered geopolitical landscape of the contemporary Middle East but also emergent forms of interdisciplinary knowledge, along with transnational and interregional approaches to scholarly inquiry, that are changing the nature of Middle Eastern studies and area studies at large. Most of the essays are framed around individual disciplines in both the humanities and social sciences. Together, they offer a compendium of insights that should be of interest to anyone concerned with the future of Middle Eastern studies.