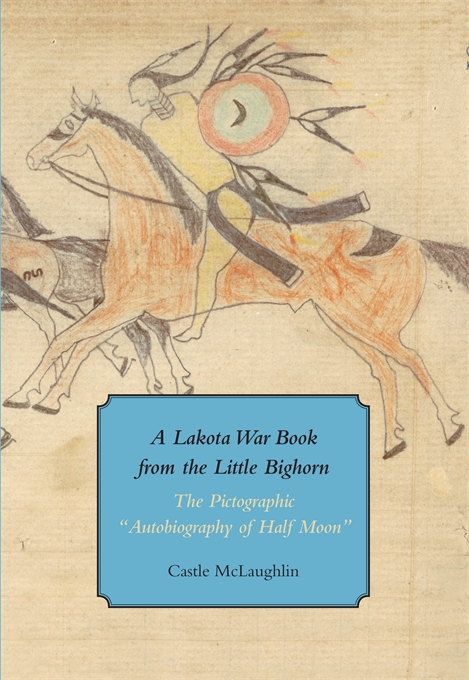 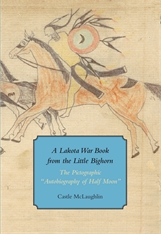 A Lakota War Book from the Little Bighorn

The Pictographic "Autobiography of Half Moon"

A Lakota War Book from the Little Bighorn is a copublication of Houghton Library and Peabody Museum Press.

Houghton Library and Harvard’s Peabody Museum Press collaborated on the publication of this fourth volume in the Houghton Library Studies series, an innovative cultural analysis of the extraordinary composite document titled by its compiler “The Pictorial Autobiography of Half Moon, an Uncpapa Sioux Chief.” At its core is a nineteenth-century ledger book of pictographic drawings by Lakota Sioux warriors found in 1876 in a funerary tipi on the Little Bighorn battlefield after Custer’s defeat. Journalist Phocion Howard later added an illustrated introduction and had it bound into the beautiful manuscript that is reproduced in complete color facsimile here.

Howard attributed all seventy-seven Native drawings to a “chief” named Half Moon, but anthropologist Castle McLaughlin demonstrates that these dramatic scenes, mostly of war exploits, were drawn by at least six different warrior-artists. Their vivid first-person depictions make up a rare Native American record of historic events that likely occurred between 1866 and 1868 during Red Cloud’s War along the Bozeman Trail.

McLaughlin probes the complex life history of this unique artifact of cross-cultural engagement, uncovering its origins, ownership, and cultural and historic significance, and compares it with other early ledger books. Examining how allied Lakota and Cheyenne warriors valued these graphic records of warfare as both objects and images, she introduces the concept of “war books”—documents that were captured and altered by Native warrior-artists to appropriate the strategic power of Euroamerican literacy.