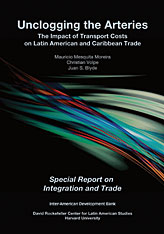 The Impact of Transport Costs on Latin American and Caribbean Trade, Special Report on Integration and Trade

Unclogging the Arteries is a copublication of the David Rockefeller Center for Latin American Studies and the Inter-American Development Bank.

This book explores the impact of transport costs on trade in Latin America and the Caribbean, and argues that transport costs have assumed an unprecedented strategic importance to the region. The region can no longer rely solely on trade agreements, proximity, labor costs, and an abundant supply of natural resources to give it a competitive advantage in international trade. The book finds that countries in Latin America and the Caribbean have transport costs that are generally higher than those of the developed world, largely because of deficiencies in infrastructure and weak competition in shipping services. It concludes that a broader and more balanced trade agenda would bring the long-neglected issue of transport costs to the center of the policy debate.