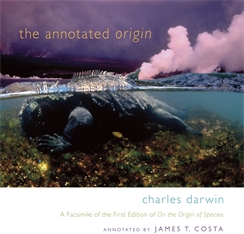 A supplement to The Annotated Origin: A Facsimile of the First Edition of On the Origin of Species, by Charles Darwin, with introduction and notes by James T. Costa

Darwin: The Genius of Evolution from the BBC

The Darwin Correspondence Project was founded in 1974 by an American scholar, Frederick Burkhardt, with the aid of Sydney Smith, a zoologist in the University of Cambridge (UK). They originally set out to locate, research, and publish summaries of, all letters written by Charles Darwin, the most celebrated naturalist of the nineteenth century (1809–82). Following a pilot project, it was decided to include letters written to Darwin also—an unusual step for a collection of correspondence at the time, and one now widely followed—and to publish complete transcripts in chronological order.

The Complete Work of Charles Darwin Online (or “Darwin Online”), begun by John van Wyhe in 2002, assembles in one scholarly website all of Darwin’s published writings and unpublished papers. It does not cover his unpublished letters, which were already the focus of the Darwin Correspondence Project. Darwin Online materials appear courtesy of the University of Cambridge and the project is sponsored by the Arts & Humanities Research Council.

Down House, the Home of Charles Darwin

Charles Darwin: Voyages and Ideas That Shook the World at the British Museum

Audio: Darwin: The Genius of Evolution from BBC Radio 4

Audio: The “Darwin College” Lectures at the University of Cambridge

Video: “Darwin in Song” from the New York Times

Slideshow: Charles Darwin: A Life in Pictures at Darwin Online

(From the Royal Mail: “To mark the 200th anniversary of Darwin’s birthday and the 150th anniversary of the publication of On the Origin of the Species by Means of Natural Selection, we are issuing six special stamps, a Miniature Sheet of four additional stamps and a Prestige Stamp Book. We’ve created a radical ‘jigsaw’ design for each stamp to demonstrate how the various areas of Darwin’s studies—zoology, botany, geology, ornithology and anthropology—came together to inform his theory of Natural Selection.”)

The Guardian, February 1, 2009: “Half of Britons Do Not Believe in Evolution, Survey Finds,” by Riazat Butt

The New York Times, December 24, 2008: “Four Stakes in the Heart of Intelligent Design,” by Charles McGrath