Villa I Tatti and Bernard Berenson

The following excerpt is from the preface of A Legacy of Excellence: The Story of Villa I Tatti by William Weaver—the first published account of life at the villa from the Berenson’s early years there until the present day. It includes 103 photographs. 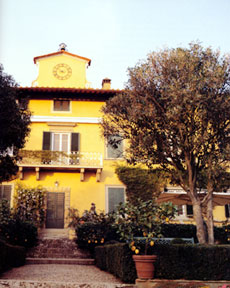 It is hard to separate the life of a house from the life or lives of that house’s inhabitants. And in the case of I Tatti, inhabited by the irresistible fascinating and colorful Berensons, the task is virtually impossible. Still, in the pages that follow, I have tried to speak of Mary and Bernard Berenson only when their lives and the life of I Tatti were interlocked. Though a house called I Tatti has long existed where the villa now stands, the Villa I Tatti that most of the vast Berenson acquaintance knew and that continues to flourish today was, practically speaking, the creation of that singular couple. But, if they shaped the house, the house also shaped them. It made Mary into a Chatelaine, whether she liked the role or not; and it made Berenson into the lord of that manor, the sage of that hermitage, the bait of that gilded trap.

The English writer, Cyril Connolly, secretary as a young man to Mary’s brother Logan Pearsall Smith, knew the Berensons and I Tatti well. In his delightful essay “The Grand Tour,” written not long after Berenson’s death and shortly before Harvard University had definitively established its Center for Italian Renaissance Studies in the villa bequeathed to it by that devoted member of the class of ’87, Connolly, in expressing his grief at the death of a mentor, also described the house, saying: “[…]when we revisited I Tatti, Berenson’s humanist sanctuary, it was pouring with rain. The great buff house with its magnificent library is now the property of the University of Harvard […] The villa remains exactly as he left it, and I wandered through the empty rooms with their familiar objects, the Sienese paintings, the Chinese porphyry lion ‘that has listened,’ he once said, ‘to so much good conversation,’ even the array of thin gilded glasses that were used at his dinner parties, while I puzzled over the nature of existence. A man who lives to a great age and who acquires both fame and wisdom in the process, remaining for upwards of sixty years in the house which he has built, comes to seem more permanent and indestructible than many a landmark beside which he grew up. And suddenly he is there no longer; the order and ceremony with which he was surrounded prove an illusion and all the affectionate encouragement he gave to others, that too has vanished. However, lovingly the home may be preserved, the personality evaporates with its discrimination and mischief; the perfect house becomes like a dead tooth; unswept, the cypress avenue grows older than its planter.”

Lovingly tended, I Tatti certainly is (and the cypress avenue is carefully, regularly swept). Those who saw Berenson in his last years, almost translucent, small and trim and apparently weightless, seldom thought of him as physically indestructable. His continuing existence into his nineties seemed a triumph of the spirit, the life-force, over corporeal fragility. And that spirit has, indeed, proved beyond destruction; it survives in the order and—though altered—the ceremony that infoms the life of Berenson’s dwelling-place.

In his day, the library was one with the house; but the life of the house—known to many—overshadowed the intense life of the library, which was the sanctuary, to use Connolly’s words, of its master and his disciples and a few of the house’s many visitors. Today the spirit surely lives on in the rooms of the house, where scholars gather around the Berenson table, where select visitors come to study the paintings, or in the garden, where the same scholars can relax and enjoy the enduring beauty that the Berensons, often painfully, brought into existence; but even more, that spirit lives on in the library, which continues to expand with vitality, as libraries must if they will remain vitalizing sources for their users.

Connolly last visited I Tatti at a peculiar moment of apparent stasis, while Harvard, the heir and the appointed keeper of the spirit, was still determining the future direction of the Center and selecting the people who would begin to guide the new institution along that path. If he were to come back today, more than thirty years later, it is safe to venture that he—lover of libraries, unabashed in his sustaining devotion to culture—would be impressed, favorably, by the conditions of the beloved place. The match that Berenson lived to protect is now blazing bravely, nay merrily.

See books in this collection and sort by title, author, format, publication date, or price »