“The Image of the Black in Western Art [is] a truly epic project… The series, scheduled for completion in 2014, is, so far, as eye-opening to view as it is to read and, one volume at a time, could be the answer to gift gifting for several years to come.”—Holland Cotter, New York Times

“One concludes from these pioneering volumes that artistic representations were historical ‘events’ that eventually helped to shape a mentality that justified the enslavement of millions of Africans as well as later attempts to Christianize and liberate their descendants.”—David Brion Davis, New York Review of Books

“I also would recommend The Image of the Black in Western Art, which is both expensive and priceless. It’s fascinating to see how black people were viewed before we decided that African ancestry made you, by God or science, property.”—Ta-Nehisi Coates, The Atlantic

“The volumes so far are a treasury of paintings and sculptures of people down the ages, taking in many strands of ritual, classicism, artlessness and humanity.”—William Feaver, The Spectator

“One of the most thorough collections depicting the African-American in works of art… The books build on the research and photo project started by art patron Dominique de Menil in the 1960s, which grew out of a frustration with segregation. The collection was then transferred and continued to grow at the W.E.B. Du Bois Institute at Harvard University. De Menil’s original volumes have been updated by David Bindman and Henry Louis Gates, Jr., and now include more detailed descriptions and provide a larger context of the artwork that spans more than 5,000 years, including the Roman Empire to present-day pieces, filling in tremendous gaps in de Menil’s collection, according to some art historians. The images, printed in full-color on high-quality pages, are available for the masses to see and understand how African-Americans not only fit into the various societies of the Western world, but how those relationships evolved throughout the ages.”—Kirkus Reviews

In the 1960s, as a response to segregation in the United States, the influential art patron Dominique de Menil began a research project and photo archive called The Image of the Black in Western Art. Now, fifty years later, as the first American president of African American descent serves his historic term in office, her mission has been re-invigorated through the collaboration of Harvard University Press and the W. E. B. Du Bois Research Institute at the Hutchins Center for African and African American Research to present new editions of the coveted five original books, as well as an additional five volumes. 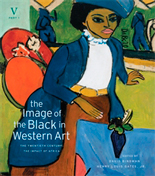 The National Gallery of Art hosted a panel discussion marking the publication of The Image of the Black in Western Art, Volume V: The Twentieth Century, Part 1: The Impact of Africa.