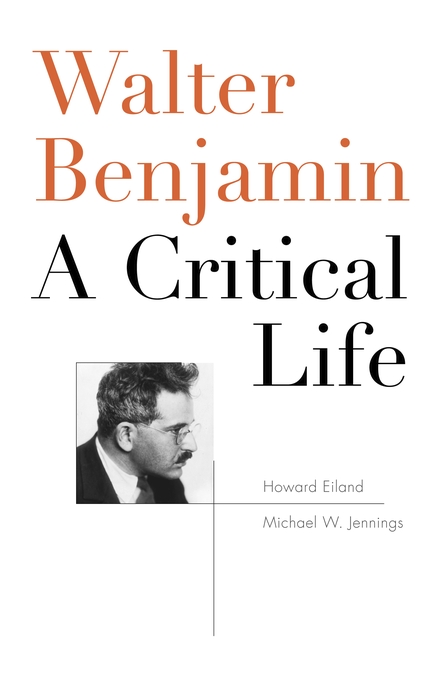 Walter Benjamin: A Critical Life, the first full critical biography of Benjamin in any language, offers a comprehensive portrait of Benjamin and his times along with extensive commentaries on his major works.

The German-Jewish critic and philosopher Walter Benjamin (1892–1940) is now generally regarded as one of the most important witnesses to European modernity. Despite the relative brevity of his writing career—his life was cut short on the Spanish border in flight before the Nazis—he left behind a body of work astonishing in its depth and diversity. In the years following what he called his “apprenticeship in German literature,” during which he produced enduring studies of Romantic criticism, of Goethe, and of the Baroque Trauerspiel or play of mourning, Benjamin established himself in the 1920s as a discerning advocate of the radical culture emerging from the Soviet Union and of the high modernism that dominated the Parisian literary scene. In the second half of the 1920s, he was at the center of many of the developments now known as “Weimar Culture.” Along with friends like Bertolt Brecht and Laszlo Moholy-Nagy, he helped shape a new way of seeing—an avant-garde realism—as it was breaking free of the mandarin modernism that had characterized German arts and letters under the Wilhelmine Empire. In this period, as Benjamin gained recognition for his writing, he harbored the not unreasonable hope of becoming “the foremost critic of German literature.”

At the same time, he and his friend Siegfried Kracauer were virtually inventing popular culture as an object of serious study: Benjamin produced essays on children’s literature; toys; gambling; graphology; pornography; travel; folk art; the art of excluded groups such as the mentally ill; food; and on a wide variety of media including film, radio, photography, and the illustrated press. In the last decade of his life, most of which was spent in exile, much of his writing originated as offshoots of The Arcades Project, his cultural history of the emergence of urban commodity capitalism in mid-nineteenth-century France. Although the arcades project remained a massive unfinished “torso,” the research and reflection that informed it generated a series of groundbreaking studies, such as the celebrated polemic of 1936, “The Work of Art in the Age of its Technological Reproducibility,” and the essays on Charles Baudelaire that established the poet as the representative writer of modernity.

But Benjamin was not only a surpassing critic and revolutionary theorist: he also left a substantial body of writing on the border between fiction, reportage, cultural analysis, and memoir. His “montage book” One Way Street of 1928, and especially Berlin Childhood around 1900, which remained unpublished in his lifetime, are modern masterpieces. In the end, many of Benjamin’s works defy simple generic classification. Among the prose works long and short are monographs, essays, reviews, collections of philosophical, historiographical, and autobiographical vignettes, radio scripts, editions of letters and of other literary-historical documents, short stories, dialogues, and diaries. There are also poems, translations of French prose and poetry, and myriad fragmentary reflections of differing length and import. 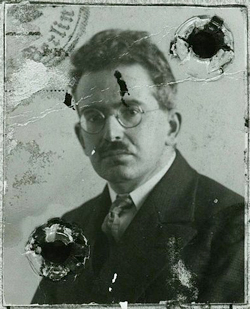 The concentrated “image worlds” evoked on the pages of these works bring into view some of the most turbulent decades of the twentieth century. Growing up in an assimilated, well to do Jewish family in Berlin in the years around 1900, Benjamin was a child of the German Empire: his memoirs are filled with recollections of the monumental architecture beloved of the Kaiser. But he was also the child of an explosive urban capitalist modernity; by 1900, Berlin was Europe’s most modern city, with new technologies burgeoning everywhere. As a young adult, he opposed Germany’s involvement in the First World War and in consequence spent most of the war years in Switzerland—yet visions of the war’s “nights of annihilation” pervade his work. In the course of the Weimar Republic’s fourteen-year existence, Benjamin experienced, first, the bloody conflict between radical left and radical right that followed the end of the war, then the devastating hyperinflation of the early years of the young democracy, and finally the debilitating political fragmentation of the late 1920s that led to the seizure of power by Hitler and the National Socialists in 1933. Like almost every important German intellectual of the day, Benjamin fled the country in the spring of 1933, never to return. He spent the final seven years of his life in a Parisian exile characterized by isolation, poverty, and relative lack of publishing venues. He was never able to forget that “there are places where I can earn a minimal amount, and places where I can subsist on a minimal amount, but nowhere in the world where these two conditions coincide.” The final period of his career saw the shadow of coming war extend across Europe.

Why do Benjamin’s works continue to speak so compellingly to the general reader and the scholar alike, more than seventy years after his death? There is the power of his ideas, first of all: his work has reshaped our understanding of many important writers, of the possibilities of writing itself, of the potentials and hazards of technological media, and of the situation of European modernity as a historical phenomenon. Yet one fails to appreciate his full impact if one ignores its distinctively etched verbal medium—the uncanny Benjaminian style. Purely as a crafter of sentences, Benjamin bears comparison to the most supple and penetrating writers of his day. And he was a pioneering formal innovator: his most characteristic works are based on what he came to call, after the poet Stefan George, the Denkbild or “figure of thought,” a short aphoristic prose form combining philosophical analysis with concrete imagery to yield a signature critical mimesis. Even his ostensibly discursive essays are often secretly composed of sequences of these trenchant “thought images,” arranged according to the principles of avant-garde montage. It was Benjamin’s genius to find the forms within which a profundity and complexity fully comparable to that of contemporaries like Heidegger and Wittgenstein could resonate through an immediately engaging and memorable prose. Reading him is therefore a sensory, no less than intellectual, experience. It is like the first taste of a tea-soaked madeleine: dimly remembered worlds blossom in the imagination. And as the phrases linger, constellate, and begin permutation, they subtly attune themselves to an emerging recombinatory logic, slowly releasing their destabilizing potential.

“The so-called inner image of oneself that we all possess is a set of pure improvisations from one minute to the next. It is determined, so to speak, entirely by the masks that are made available to it. The world is an arsenal of such masks. But the impoverished and desolate human being seeks out the image as a disguise within himself. For we are generally lacking in internal resources. This is why it makes us so happy when someone approaches us with a whole boxful of exotic masks, offering us the more unusual kinds, such as the mask of the murderer, the magnate, or the round-the-world sailor. We are fascinated by the opportunity of looking out through these masks.”
—from “Short Shadows (I),” collected in Selected Writings, Volume 2: Part 1

Yet for all the brilliant immediacy of his writing, Benjamin the man remains elusive. Like the many-sided œuvre itself, his personal convictions make up what he himself called a “contradictory and mobile whole.” This incisive formulation, in which one hears an appeal to the patient reader, is indicative of his protean and polycentric cast of mind. But Benjamin’s ungraspability also bespeaks a self-conscious practice aimed at maintaining around him a hermetic space for experiment. Theodor W. Adorno once remarked of his friend that he “hardly ever showed his cards,” and this deep reserve, with its recourse to an arsenal of masks and other strategies of indirection, served to guard the well of inwardness. Thus the consummate politeness remarked by all—in the end a complex distancing mechanism. Thus the appearance of weighty maturity at every epoch of his conscious life, a gravity that lent to even casual utterances something of the oracular. And thus his stated “policy” of preventing, whenever possible, extended contact between his friends, the better to preserve each individual or group as a sounding board for his ideas.

Within this shifting field of operations, Benjamin conducted himself from an early age in such a way as to realize “the many modes of existence inherent in [him].” If Nietzsche saw the self as a social structure composed of many wills, Benjamin conceived it as “a set of pure improvisations from one minute to the next.” It was in keeping with a precipitous integral dialectic that this utter lack of personal dogmatism coexisted with a sovereign and sometimes ruthless power of judging. Of course, the pronounced multiplicity of the phenomenon of Walter Benjamin does not exclude the possibility of an inner systematic, or of a textural consistency such as Adorno posits in referring to his friend’s extraordinary “centrifugal” unity of consciousness, a consciousness that constitutes itself by diffusing itself into the manifold. 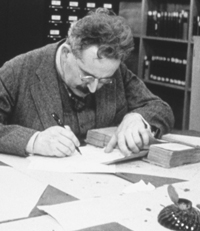 Much of Benjamin’s writing lies on the border between fiction, reportage, cultural analysis, and memoir, defying simple generic classification.

What finally binds this untoward complexity of character, then, is sheer, blinding brilliance of mind. The accounts of Benjamin’s person left by friends and acquaintances inevitably start and end with an attestation of such power. They stress, too, his ever present high-mindedness and a strangely incorporeal presence to others. Pierre Missac, who came to know him late in life, says he could not tolerate a friend’s so much as putting a hand on his shoulder. And his Latvian love, Asja Lacis, once remarked that he gave the impression of having just arrived from another planet. But this semblance of disembodied brilliance was shot through by a vital and sometimes fierce sensuality, evidenced in Benjamin’s erotic adventurism, his interest in intoxicating drugs, and his passion for gambling. Not to mention his famous melancholia and abyssal “brooding.” This was a thinking that never lost touch with concrete realities.

Between 1940 and 1955, Benjamin’s name all but disappeared from the world of arts and letters. There were posthumous publications in German and French journals, and in 1950 Suhrkamp Verlag published an edition of Berlin Childhood around 1900 that met with little notice. But the 1955 publication of the first extensive collection of Benjamin’s writings, the Schriften in two volumes edited by Adorno, began to open a broad new audience for these writings, which were soon being reprinted and translated worldwide. Beginning in 1974, Suhrkamp brought out its seven-plus volumes of the Gesammelte Schriften (Collected Writings), and it is now in the process of producing a new critical-historical edition of Benjamin’s works, the Kritische Gesamtausgabe.

With its publication of the four-volume Selected Writings (1996–2003) and The Arcades Project (1999), Harvard University Press has made Benjamin’s most important works available to a large English-language reading public. A series of volumes intended primarily for classroom use followed: Berlin Childhood around 1900, The Writer of Modern Life: Essays on Charles Baudelaire, and On Hashish (all 2006), The Work of Art in the Age of its Technological Reproducibility, and Other Writings on Media (2008), and Early Writings (1910–1917) (2011). The publication of Walter Benjamin: A Critical Life, the first full critical biography of Benjamin in any language, represents the capstone of this decades-long enterprise. 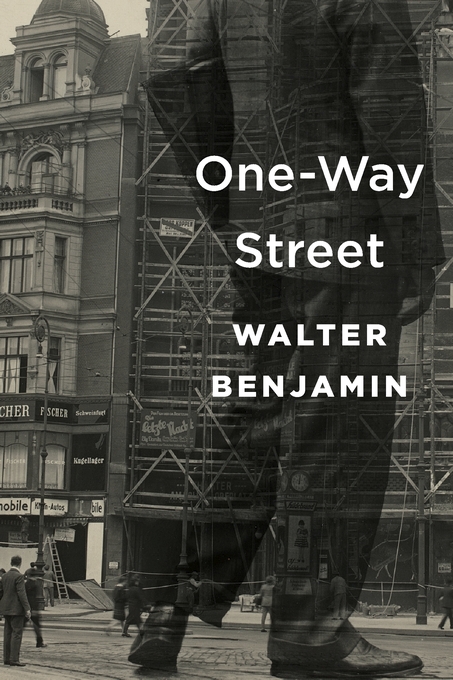 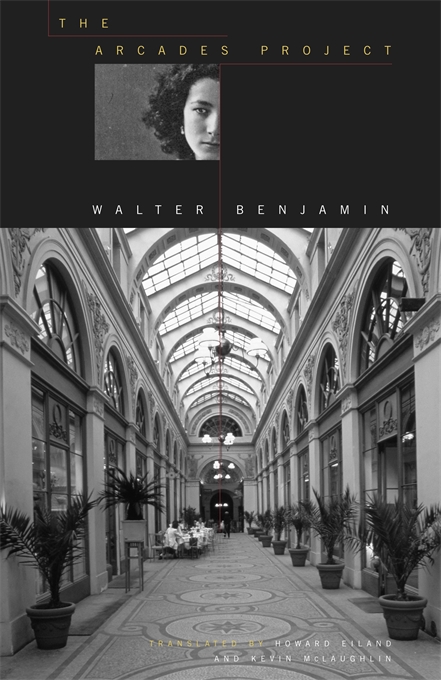 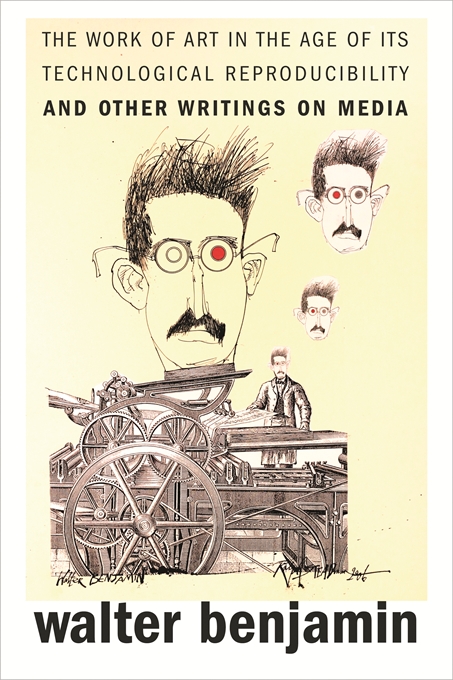 The Work of Art in the Age of Its Technological Reproducibility, and Other Writings on Media
Edited by Michael W. Jennings, Brigid Doherty, and Thomas Y. Levin 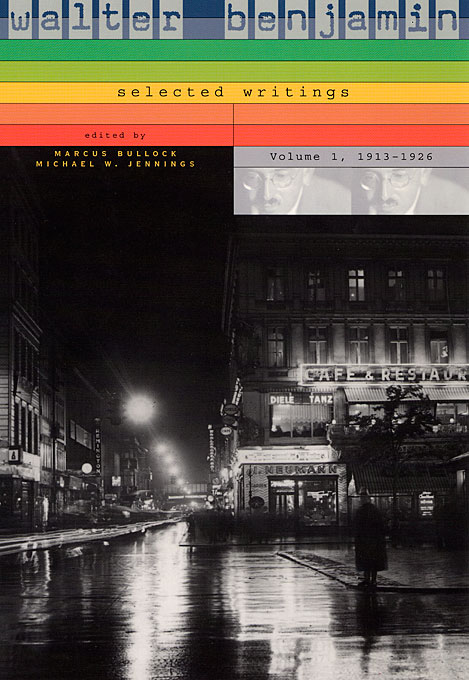 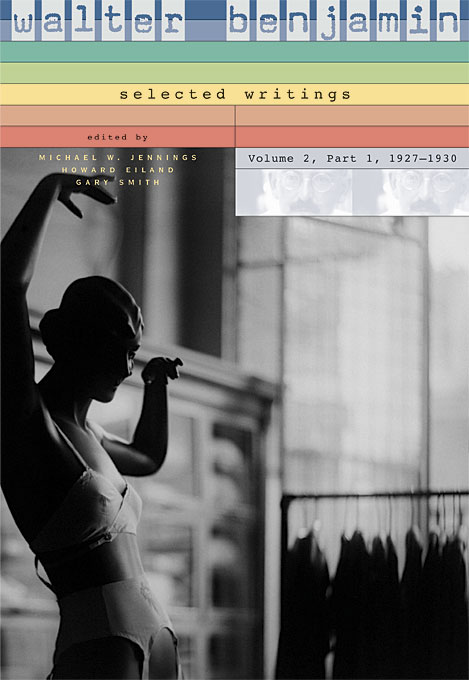 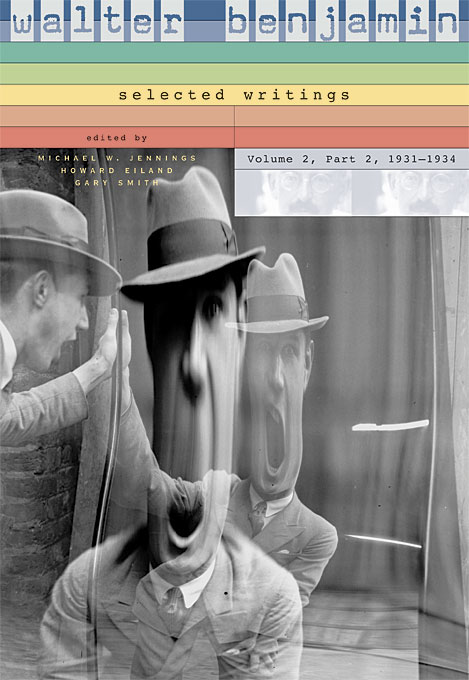 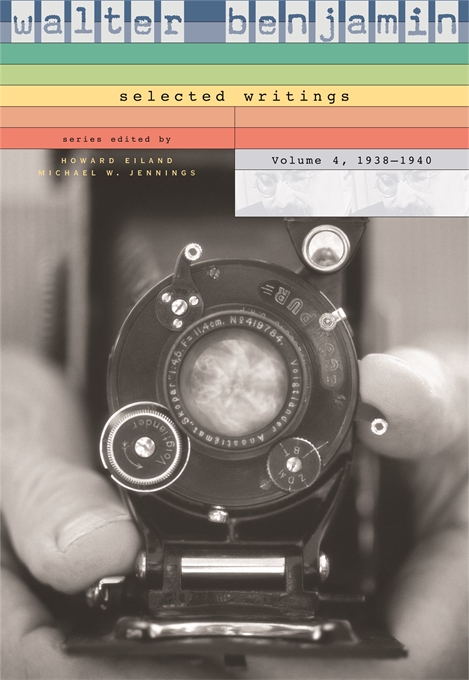 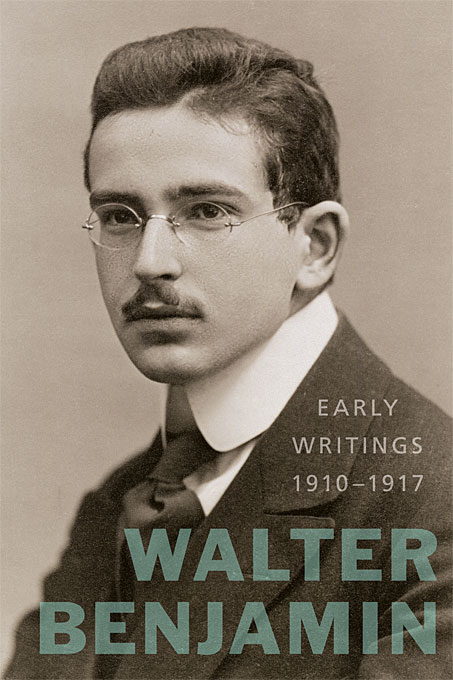 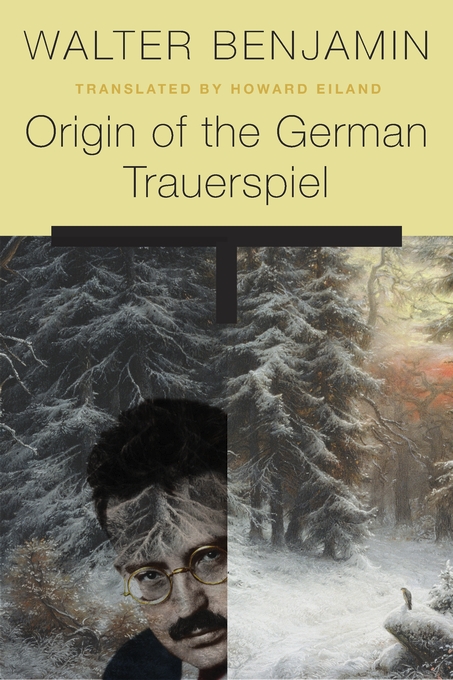 Origin of the German Trauerspiel
Translated by Howard Eiland 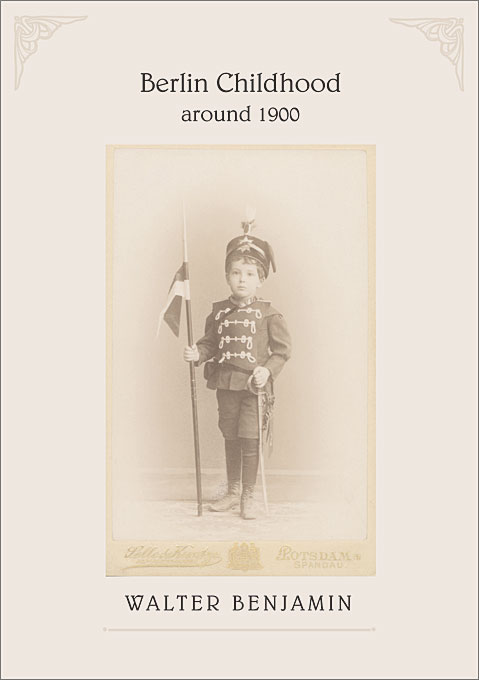 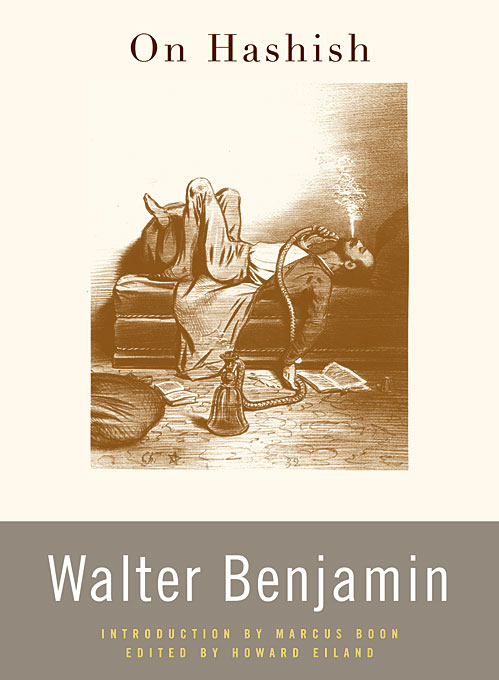 On Hashish
Edited by Howard Eiland, Introduction by Marcus Boon