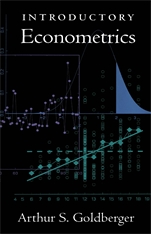 This web-only supplement comprises seven data sets referred to in Arthur S. Goldberger’s Introductory Econometrics. Each data set may be downloaded as an ASCII text (.txt) file. Within each file, comments are enclosed by the “@” symbol and a semicolon is the end-of-file indicator.

Arthur S. Goldberger was Professor of Economics, Emeritus, at the University of Wisconsin–Madison. He also wrote A Course in Econometrics.

Questions or comments on the data sets or other aspects of the book may be directed to Harvard University Press.